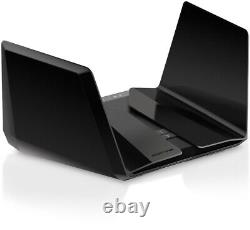 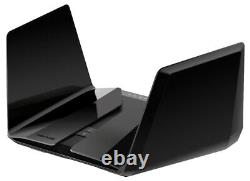 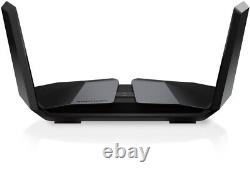 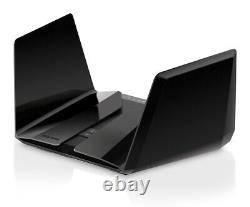 Rising to the challenges of modern smart home demands, this new Capacity Wi-Fi 6 gives you improved network capacity for more WiFi devices. Have more fun with the uninterrupted 4K/8K streaming, gaming, and the smart home experience.

With MU-MIMO, Wi-Fi 6 supports up to eight simultaneous streams for the number of users that can be served double at the same time as compared to an AC router. Tandard of WiFi is ready to support more devices with better reliability and faster speeds.

Or aggregate two Ethernet ports for up to 2Gbps of Internet speed. Powerful Quad-Core 1.8GHz Processor Ultra-fast processor for smoother 4K/8K. Ultra High Definition (UHD) is the resolution 3840x2160 pixels. What this means is that there are more pixels per inch (PPI) in a UHD display than a FHD (Full High Definition 1920x1080) display.

Orthogonal Frequency Division Multiple Access (OFDMA) Using the OFDMA feature of Wi-Fi 6, the WiFi traffic is managed much more efficiently since data is transmitted rom different devices concurrently, rather than having each device??? S data wait for its turn. This results in an efficient use of air-time, reduced latency, and increased bandwidth to add more devices to your network.

This powerful processor is optimized for AX making intelligent spontaneous decisions to schedule data traffic to maximize WiFi Bandwidth utilization. Award-Winning Industrial Design This next-generation Nighthawk Tri-Band AX12 Wi-Fi 6 Router router design conceals eight (8) high-performance antennas under the??? The antennas are optimally positioned for best WiFi performance and extend strong and reliable WiFi coverage indoors and outdoors. Nighthawk App The NETGEAR Nighthawk App makes it easy to set up your router and get more out of your WiFi. With the app, you can install your router in a few steps???

Just connect your mobile device to the router network and the app will walk you through the rest. Once set up, you can use the intuitive dashboard to pause the Internet on your connected devices, run a quick Internet speed test, and much more!

The button which is pressed to switch the device on or off. The sub-category of the product. The amount of memory, usually measured in bytes e. MB, GB, which is installed in the system's hardware. The number of central processing units ('cores') in a processor.

Some processors have 1 core, others have 2 e. Intel Core Duo or more e. The Intel Xeon E7-2850 has 10 cores. The clock rate is the fundamental rate in cycles per second (measured in hertz) at which a computer performs its most basic operations such as adding two numbers. There are more factors, like internal memory size, that influence a computer's actual response time. Products per master (outer) case. Master (outer) case gross weight.

Secure access to your home network away from home. The way in which the network is working, e.

USB 3.2 Gen 1 (3.1 Gen 1) Type-A ports quantity. Universal Serial Bus (USB) is an industry standard developed in the mid-1990s that defines the cables, connectors and communications protocols used in a bus for connection, communication, and power supply between computers and electronic devices.

USB was designed to standardize the connection of computer peripherals (including keyboards, pointing devices, digital cameras, printers, portable media players, disk drives and network adapters) to personal computers, both to communicate and to supply electric power. It has become commonplace on other devices, such as smartphones, PDAs and video game consoles. USB has effectively replaced a variety of earlier interfaces, such as serial and parallel ports, as well as separate power chargers for portable devices. Number of Ethernet LAN (RJ-45) ports (connecting interfaces) in the device. Ethernet LAN (RJ-45) ports allow a computer to connect to the ethernet.

What the power source is. Universal Plug and Play (UPnP).

The distance from the front to the back of something. The measurement of the product from head to foot or from base to top. Weight of the product without packaging (net weight). If possible, the net weight is given including standard accessories and supplies. The measurement or extent of something from side to side. WLAN data transfer rate (third band). WLAN data transfer rate (second band).

This item is in the category "Computers/Tablets & Networking\Home Networking & Connectivity\Wireless Routers". The seller is "morefrom" and is located in this country: GB. This item can be shipped to United Kingdom.