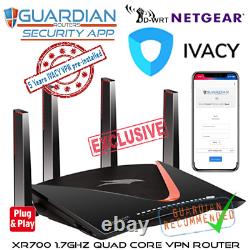 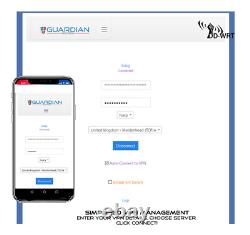 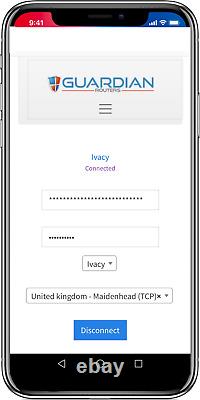 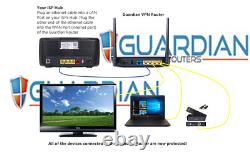 All of your connected devices will be protected. Works Worldwide with all ISPs.

No changes required to you ISP Hub. Guardian Security App Routers use OpenVPN Protocol. Fully loaded with all the following VPN providers. Just leave a message with your VPN details if you would like us to add them to the Router before dispatch!

The Netgear XR700 X10 is a'top of the range' VPN Router and just wins as our preferred router with the Netgear R9000 X10 coming a close 2nd. The XR700 has Tri-Band 2.4GHZ/ 5GHZ / 60MHZ AD7200 WIFI with 3000sq ft coverage and a very nice Quad Core 1700MHZ CPU. This build quality of this router is stunning and it is brimming with hardware features not seen on cheaper models which includes six GigaBit LAN ports, LED illuminated high-gain antennas and all housed in a metal vented chassis. The XR700 X10 is rock solid, It easily copes with multiple connected devices, streams up to 4K IPTV and allows protected online gaming whilst still protecting all of the devices on your network.

We understand that purchasing the right router for your requirements can be a minefield, so if you have any questions please ask. You can then change the password if you require but remember to change it on the router as well (we do not store of share customers VPN details). You can unsubscribe at any time.

If all is well please leave feedback, so we are aware that you have received your goods. 14 days after we have despatched your order, if we have not been notified by you of any problem, or received feedback, we will send a feedback reminder. Please allow 7 - 14 days for International customers.

We accept no responsibility for goods delayed due to the services of our courier. Do not use basic speed tests to determine your VPN encrypted internet speeds.

Within these tests, there are many variables not taken into consideration making the results inaccurate. We highly recommend using your Guardian Router as you would any other router. Normal everyday usage will better gauge your speed performance. Please note - we can only advise what speed we have achieved with this router and what this router is capable of. Your speed WILL vary from speeds in this listing as your ISP line speed will differ from ours and there will be things on your network using bandwidth that are not present on ours.