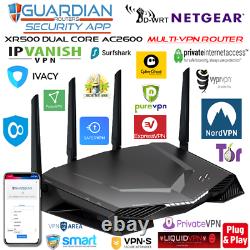 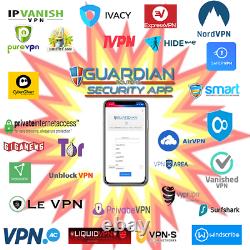 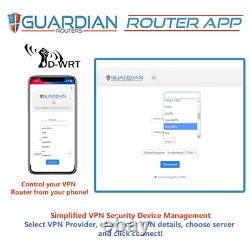 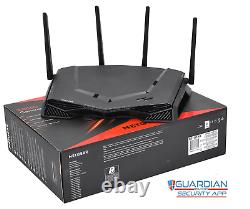 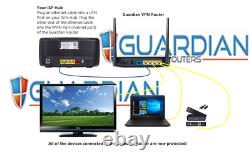 Netgear XR500 Guardian Security App VPN Router. Just select your VPN provider from the list. Enter your VPN username and password. Select required VPN server from the list. All of your connected devices will be protected.

Works Worldwide with all ISPs. No changes required to you ISP Hub. Guardian Security App Routers use OpenVPN Protocol.

Fully loaded with all the following VPN providers. Just leave a message with your VPN details if you would like us to add them to the Router before dispatch! The Netgear Nighthawk XR500 is a middle to top range VPN Router boasting a Dual Core 1700MHZ CPU to decrypt the VPN data and Dual Band 2.4GHZ/ 5GHZ AC2600 WIFI with 2500sq ft coverage.

The rear of the XR500 has a WAN and four LAN ports, all of which can move data at up to a gigabit per second and sports two USB 3.0 ports for expansion. Its four amplified antennas screw onto the routers back and side. They can be aimed and swiveled to grab the strongest signal and are numbered as the antennas are paired to each port to ensure best performance. Dual Core 1700MHZ CPU, Dual Band AC2600 Wireless, 2x USB 3.0 expansion and 4x Gigabit LAN Ports.

What features does the Guardian VPN App have? Kill Switch on defined devices. Allow devices to bypass the VPN.

Router upgraded with the latest stable / approved full DDWRT firmware. Plug and Play' fully configured and secured router. Lifetime access to Guardian Routers help and advanced user guides. Lifetime access to the Guardian Routers Support ticketing system. We understand that purchasing the right router for your requirements can be a minefield, so if you have any questions please ask.

You can unsubscribe at any time. If all is well please leave feedback, so we are aware that you have received your goods.

14 days after we have despatched your order, if we have not been notified by you of any problem, or received feedback, we will send a feedback reminder. Please allow 7 - 14 days for International customers.

We accept no responsibility for goods delayed due to the services of our courier. Do not use basic speed tests to determine your VPN encrypted internet speeds. Within these tests, there are many variables not taken into consideration making the results inaccurate. We highly recommend using your Guardian Router as you would any other router.