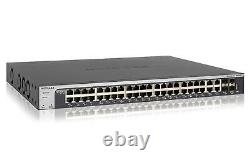 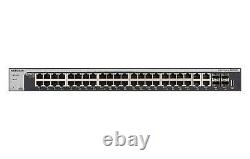 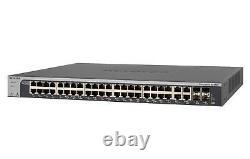 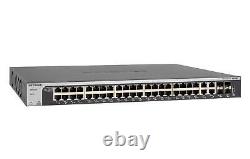 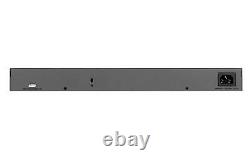 As a leading provider of network equipment for SMBs, Netgear understands the importance of reliable and high performance networks. With the growth of virtualisation, cloud-based services and applications like VoIP, video streaming and IP surveillance, SMB networks need to extend beyond simple reliability to higher speed and performance.

The 10-Gigabit Smart Managed Pro Switch series from Netgear presents the right solution for this requirement; delivering unprecedented non-blocking 10-Gigabit bandwidth at an affordable cost. The Netgear XS748T is a powerful Smart Managed Switch that comes with 44 10-Gigabit Copper ports and 4 additional Dedicated SFP+ ports for 10G fibre uplinks. The Netgear 10-Gigabit Smart Managed Pro Switch is purposely designed as a cost-effective way to provide 10G connections to 10G-capable servers and NAS systems. They can be used at the "centre of a small business network" or as an aggregation/access switch in a larger organisation including workgroup access, connecting to a 10-Gigabit Netgear Fully Managed Switch on one end and extending the 10G connections to the edge.

10GBASE-T, like other BASE-T technologies, usees the standard RJ-45 Ethernet jack. It is backward compatible, auto-negotiating between higher and lower speeds - thereby not forcing an all-at-once network equipment upgrade. Cat 5 / Cat 5e are supported for Gigabit speeds up to 100 metres.

Cat 6 twisted pair copper cabling supports 10-Gigbit speeds up to 45 metres. Cat 6a or new Cat 7 cabling will allow for up to 100 metre 10GBASE-T connections.

DEsigned as a core switch for SMB networks. 10G connection to 10G-capable servers and network storage.

Smart IT, not Big IT. Standards-based technology, ensuring interoperability with any standards-based devices in the existing network. Dual firmware images, improving reliability and uptime to your network. This item is in the category "Computers/Tablets & Networking\Enterprise Networking, Servers\Switches & Hubs\Network Switches".

The seller is "box_uk" and is located in this country: GB. This item can be shipped to United Kingdom.