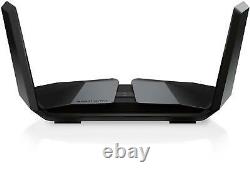 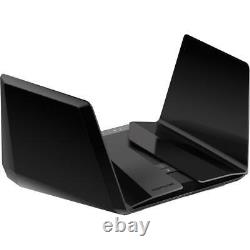 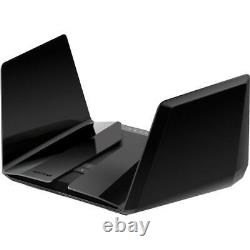 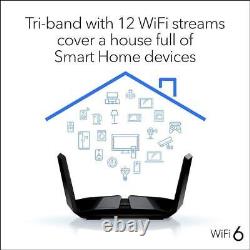 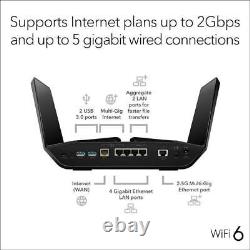 Nighthawk App-Easily set up your router and get more your of your WiFi. Includes remote access to manage your network when away from home.

Automatic Firmware Updates - Latest security patches delivered to the router. Works with Existing WiFi Devices- Supports current Wi-Fi devices and is backward compatible with Wi-Fi 5 (802.11ac), Wi-Fi 4 (802.11n) and earlier generation Wi-Fi standards. Works with Amazon AlexaT and the Google Assistant-Control your NETGEAR WiFi with simple voice commands. Maximum wireless signal rate derived from IEEE 802.11 specifications. Actual data throughput and wireless coverage will vary and may be lowered by network and environmental conditions, including network traffic volume and building construction. Fastest Wi-Fi Speeds with the Tri-Band Advantage. The Nighthawk® Tri-band AX12 is the fastest router for Gigabit internet with combined speeds up to 10.8GBPS. Tri-band WiFi optimizes speeds across the three WiFi bands ensureing that your fast WiFi stays fast and can efficiently handle multiple devices connected to the network.

Gigabit speeds over tri-band WiFi can support far more data simultaneously, making it possible to stream music in the kitchen, 4K video in the living room and multi-player online gaming without a hiccup. More WiFi streams provide more available bandwidth and less congestion for all the devices in the WiFi network. Since separate data signals can be sent to and from your devices on different streams, the amount of information that can be sent over your network greatly increases.

This next-generation router design conceals eight high-performance antennas under its'wings'. The antennas are optimally positioned for best WiFi performance, extending reliable and stronger WiFi coverage indoors and outdoors. Nighthawk Tri-band AX12 router is also wall-mountable. The NETGEAR Nighthawk® App (formerly Up app) makes it easy to set up your router and get more out of your WiFi. With the app, you can install your router in few steps - just connect your mobile device to the router network and the app will walk you through the rest.

Once set up, you can use the intuitive dashboard to pause Internet on your connected devices, run a quick Internet speed test and much more. Reliable Smart Home Connectivity - Wi-Fi 6 features simultaneous dual band support, making it ideal for multiple IoT devices in our connected homes. Your WiFi will stay strong and reliable, even with more WiFi devices on your network from the sensor-based low-bandwidth devices to high-end video streaming.

Smoother UHD 4K/8K Streaming - Watch ultra-HD 4K/8K videos on your smart TV while your family games online and uploads pictures from their smartphones. Streaming from Netflix or YouTube has never been so smooth. Faster and Farther Coverage - WiFi has never been faster or reached farther. So whether your family is gaming in the basement or streaming videos by the pool, everyone enjoys ultra-fast wireless speeds, indoors and out.

RAX80 with 8 high-performance antennas provide stronger and reliable whole home coverage. This item is in the category "Computers/Tablets & Networking\Home Networking & Connectivity\Wireless Routers". The seller is "box-deals" and is located in this country: GB. This item can be shipped to United Kingdom.