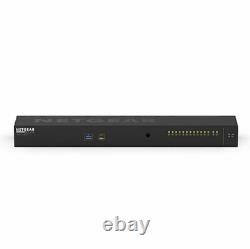 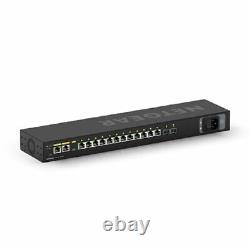 The NETGEAR M4250 Switch Series introduces the AV Line, developed and engineered for audio/video professionals with dedicated service and support. M4250 has been built from the ground up for the growing AV over IP market, combining years of networking expertise in AV with M4300 and M4500 series with best practices from leading experts in the professional AV market.

When requirements are more specific, an AV user interface offers customization with port-based profiles. For video the M4250 offers profiles for NVX, SVSI, Q-SYS, NDI, Dante etc. As well as audio/ video/control mixed profiles. When multiple switches, NETGEAR IGMP PlusT brings automation for you to just connect them together, or with M4300 and M4500 switches.

Feature set includes static, RIP and PIM routing, DHCP Server and PTPv2. Audio Video Bridging (AVB) Services. AVB is one of the many features designed into the M4250 product line. AVB is an industry standard for transporting content over a network.

AVB is used most often when very low latency is required such as in live performances when lip sync is critical. All of the AV Line M4250 switches can be optionally licensed for AVB support.

The seller is "ebuyer_uk_ltd" and is located in this country: GB. This item can be shipped to United Kingdom.